As usual, the procrastinator Daddy, waited till the last minute to renew his car insurance and road tax. It was going to expire yesterday so we had no choice but to drive down to KL to renew it since it was a public holiday in Selangor yesterday.

Since it was almost lunch time after he was done with the insurance, I wanted to eat in KL at one of those old restaurants. However, my kids were not keen on old restaurants. Fortunately, Daddy found a compromise for us – a new restaurant at a very old shop.

Located at Jalan Balai Polis near Petaling Street was Ali, Muthu & Ah Hock Kopitiam. The Star newspaper, Bernama, Time Out and a few food blogs reviewed recently and it looked interesting enough so we thought it would be great to check it out.

The concept of the restaurant was interesting. It definitely looks old but with touches of new. The peeling paint does not seem gross but goes nicely with the overall decor.

The menu was not extensive but has a muhibbah mix to it. Price is affordable too, with most of the food RM8 and below. 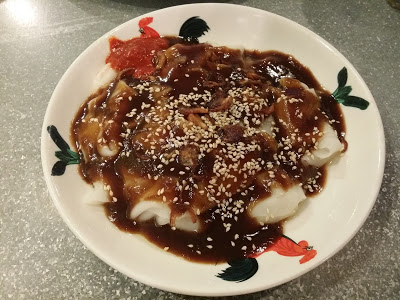 The portion of all the food was quite big. We had to pack more than half of the hokkien mee back.

The place was quite quiet when we arrived there just before noon. By the time we finished, the whole place was packed.

As it was raining, I could not take photos of the exterior. Princess Isabel, though, was in the mood to pose for photos, under the drizzling rain.

If going over to KL is a bit too far for you, there is also another branch at Oasis Damansara. I wouldn’t say that the food was out of the world kind of delicious but it was simple and nice enough for me. Something nice for the family on our day off.