It was a long Merdeka weekend and I was thinking what to do with the kids. I wanted something outdoor and does not cost money. Thought of going to the park at Bukit Kiara but was too lazy to drive all the way from one end of Puchong all the way to Taman Tun.

I was thinking of a park nearby and suddenly remembered there was one in Bukit Jalil. I had never been there before so I googled it up. I was surprised to see that there was a huge playground there. Ok, it may not be as big as the one in KLCC but it was big enough.

So, perfect! That’s where I was bringing the kids on Merdeka morning.

We woke up late at almost 9am. The sun was already up and I tried to get the kids to get ready before the sun got too hot. We had a quick errand to run before we could go to the playground so we rushed and were out of the house within 15 mins. By the time we reached there, it was already 10am. Thank goodness, it was a beautiful morning and the sun was not scorching hot.

There were 3 sections of playground and obviously, the kids went for the biggest one. 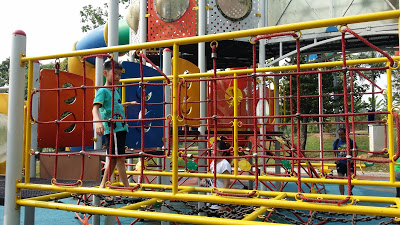 There was also a lady renting out sticks for kids to play bubbles.  At first, I thought that she was selling the sticks and soap. At RM3 for a small stick and RM4 for a medium one, I thought it was ok. Then I saw the other kids returning the sticks when they were done playing. The lady must be making almost 95% profit by just renting the sticks and providing a bit of soap water! Well, the kids were eager to play so I had no choice but dig out RM8 for the both of them. So much for thinking that it would be a cost-free outing!

After 10 minutes with the bubbles, it was back to the playground.
There was also a lake and a jogging path there. As the jogging path looks so quiet, we decided not to check it out. Instead, we just went down to have a look at the lake.

On the way down to the lake, Isabel stopped and posed for me to take photos of her. LOL!

Nothing much to see at the lake. We didn’t even bring any bread to feed the turtles.
Next, it was time for reflexology.

Picnic time! Isabel asked for sandwich, which I did not have time to make. Then she asked for pasta, which I also did not have time to make. She rolled her eyes and asked me what did I bring then. Just leftover Krispy Kreme doughnuts and chips, I told her. “Fine, whatever”, she sighed. “Next time can you please bring more food? This is not really a picnic,” she complained. I looked at her and rolled my eyes as well, telling her to prepare the food herself next time.

After finishing the doughnuts and chips, it was back for another round on the playground.

By 12noon, we had 2 very sweaty and tired kids. It was a great morning and we really should go outdoors and enjoy the sun more often! And I will remember to wake up earlier so that I have time to prepare a real picnic.