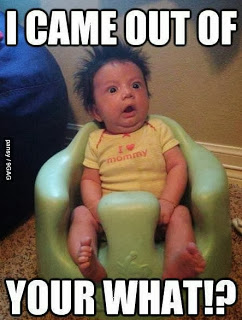 Have your kids started asking you where do babies come from? How did you answer them?

My kids started asking me after my daughter, Isabel (who was 3 years old at that time), saw a heavily pregnant woman and asked me why was she so fat. I explained that that woman was not fat, but has a baby inside her.

She was taken by surprise that a baby could live inside her mummy. Fortunately, she did not ask me how the baby went inside. She only asked how was the baby going to come out. So, I told her that mummies poo-ed their babies out. She wanted to know if I poo-ed her out in the toilet. My son, who was listening, shouted “Eewww!” and was obviously disgusted at the thought of it. Of course, I told them that I did not poo them out in the toilet but I went to a hospital and the doctors helped me to poo them out. This explanation was good enough for them.

So the matter went to rest until it came up again recently when Isabel asked if it was painful when I poo-ed her out. She must have been thinking about it and wondering how I can poo out such a big baby.

Anyway, Ethan and Isabel now understand the ‘concept’ of how babies come out from their mummies but still think that the babies were poo-ed out. It’s close enough and I think this will do for now.

Hhhmmm, I am wondering what kind of videos should I show them when they ask me how babies get inside their mummy’s stomachs….

So, how did you explain all these to your kids?